Recycled aluminium’s role in reducing carbon emissions: Why it’s important and how to get there

Recycling can – and should – be an important contributor to achieving a low-emission world. For Hydro, the recycling of post-consumer scrap with decarbonized operations is one of the main pathways to take the lead in delivering aluminium with a CO2 footprint of zero in industrial-scale production by 2030.

“Cutting carbon emissions has risen from being an activist issue to becoming an issue on the top of the agenda for politicians, regulators, investors, consumers and society as a whole," says Trond Olaf Christophersen, Head of Recycling in Hydro Aluminium Metal.

Why does aluminium matter so much for the circular economy?

Since it came on the scene in 1825, about one billion metric tons of aluminium have found their way into a multitude of goods in our lives, and, astonishingly, about 75 percent of it is still in use today. Why?

“There are fewer metals that are stronger, more durable and more useful than aluminium. It can be machined, formed and shaped, is second only to copper in conductivity, conducts heat well, is non-sparking, resists corrosion and rust, and is non-magnetic,” Christophersen explains.

It can also be recycled – over and over again without losing its properties – making aluminium an ideal metal for the circular and low-carbon economy.

Recycling aluminium requires only 5 percent of the energy used for production of primary aluminium, saving both energy and reducing greenhouse gas emissions.

For this reason, producing low-carbon aluminium using renewable energy instead of fossil-based energy, is also important next to recycling the aluminium already in use.

Aluminium is also a key material in many of the green transition plans for other sectors, playing a large role in industries such as the automotive sector and within renewable energy. As sectors like car manufacturing and building and construction aim to cut their emissions, aluminium must help meet this demand in a responsible way.

Today, only 12 percent of materials used in Europe come from recycling. In theory, most things can be recycled, but that is not the case in practice. To make sure materials stay in the loop after the end of life of a product, designers and product developers need material competence to understand the before and after, so that new products may maintain their quality grade applicability.

While recycling aluminium offers huge potential in reducing carbon emissions, collecting the scrap is not always easy or possible, and the recycling process itself is not flawless. Though a high percentage of aluminium is already being reused or recycled, there is still work to be done to gather materials from outside standardized collection programs.

“One example is aluminium that has ended up in landfills as part of mixed waste. Another is aluminium from new applications and innovative new products where industrialized collection programs and recycling methods have yet to be implemented,” Trond Olaf Christophersen says.

The difference between pre- and post-consumer scrap

It matters where and how aluminium is produced.

A key challenge in the recycling process of post-consumer scrap is the removal of unwanted elements in the scrap stream, including paint, lacquer coating, oil, plastics, iron, minerals, and organic compounds. These need to be removed from the metal to improve scrap utilization and ultimately the recycling potential of the aluminium. This is a highly technical process and is dependent on the scrap’s origin, chemistry, previous use, and physical properties.

New technologies are continuously being researched and developed to help off-set and solve these issues. Further, important plans, policies and directives will have an impact on the way we produce, go to market and consume in the future.

Indefinitely recyclable with endless uses, aluminium is an ideal metal for the circular and low-carbon economy. Explore in depth how recycling aluminium can accelerate the transition towards a circular economy and get an overview of Europe’s key green policies and their impacts on manufacturing, marketing and production. 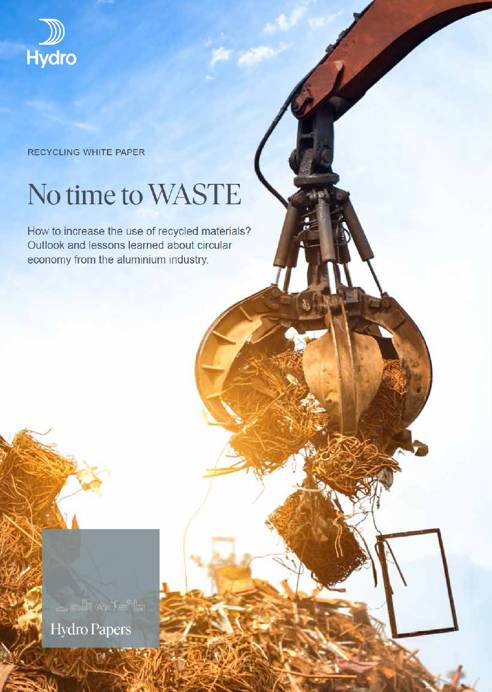